The introduction of the Loch Bhrusda jet powered car ferry on the Sound of Harris route in 1996 transformed inter-Island links - so much so that it is now regarded as too small to cope with the volume of traffic.

There has been a staggering growth in the number of commercial vehicles using the route - up by 580 per cent in 1999 over the start-up year.

This has transformed the internal economy of the Islands. Leverburgh in South Harris has seen a host of developments - including a cafe, a bunkhouse and a hairdressers - built on the back of the stream of people now pouring through it to the ferry - while companies both north and south of the Sound of Harris as varied as bakeries and equipment hire have been able to get access to a much bigger Island market than ever before. 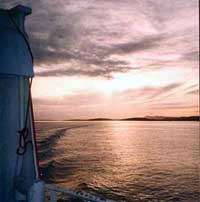 Before June 1996, the only car ferry linking the northern and southern parts of the Hebrides was part of the triangular service from Tarbert, Harris to Uig on Skye and Lochmaddy, North Uist. It was not possible to make a direct journey from Tarbert to Lochmaddy on most days of the year, leaving travellers with a four-hour excursion via Skye. The alternative was a passenger-only ferry from Leverburgh to Berneray and North Uist - often an exciting trip across the rolling swell of the Sound of Harris and involving shooting a tidal race through a rocky reef near Berneray in certain states of the tide.

This is a result of what's called the New-Ship Effect - described in a Scottish Office report at the time the Loch Bhrusda came into service. This explained how it is impossible to predict the increase in usage from a new ferry because there's no way in advance of finding how many possible journeys have never been made because of previous restrictions.