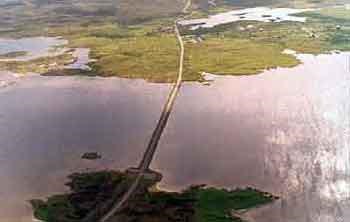 The link across Loch Bee in South Uist is the the oldest causeway involved in the Western Isles Spinal Route.

It was first built in the 18th century and crosses Loch Bee, a huge inland loch with narrow entrances, controlled by tidal valves, to the sea on both sides of South Uist.

The 550 metre causeway was originally built for cart traffic and was made up of two drystone walls, one on each side, with shingle and sand between.

It was surfaced in the 1930's and then widened and raised higher above the tide about 1959.

In 1983-4, along with other causeways in the Uist and coastal roads elsewhere, it sustained storm damage.