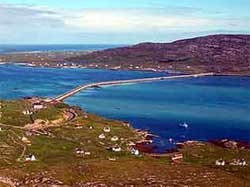 The causeway to Eriskay was the largest civil engineering project of its type under way in the United Kingdom in 2000-2001. It is the latest in a series of fixed links built between the many islands which make up the Western Isles (Outer Hebrides).

To the north of Eriskay lie the islands of the Uists, Benbecula and Berneray, all now linked by causeways. A high quality car ferry service now links these islands with Harris and Lewis to the north.

The causeway to Eriskay ended the isolation of its people and makes Eriskay a link in the north-south route along the 135-mile island chain. The ferry link to Barra will integrate that island (along with more distant Vatersay) with the other islands.

Over the last 100 years, a whole series of communities have vanished because of the problems caused by isolation. St Kilda is the most remote and most famous but others include Mingulay and Berneray south of Barra, the Monach Isles, Scarp and Taransay. The aim of the Council's transport policy is to reduce the effects of peripherality.

The port village of Leverburgh in South Harris has already seen considerable development since becoming the ferry link to the south - and traffic on its Loch Bhrusda ferry greatly exceeded forecasts. A new bigger ferry is to be put on the run during 2003.

The Eriskay link gives fishermen from the South Uist area - with about 45 boats operating - access to the excellent anchorage at Acarsaid in southern Eriskay.